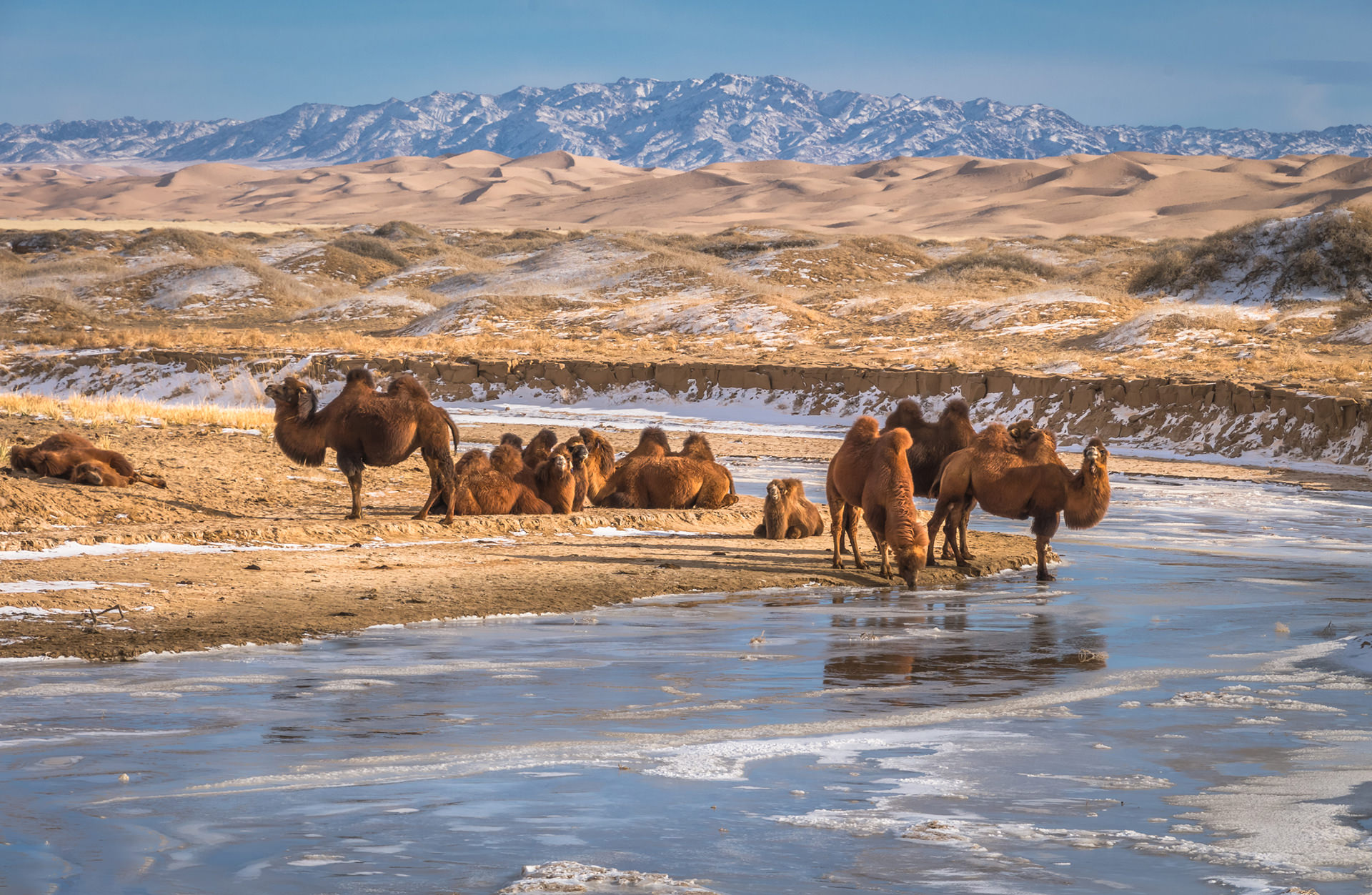 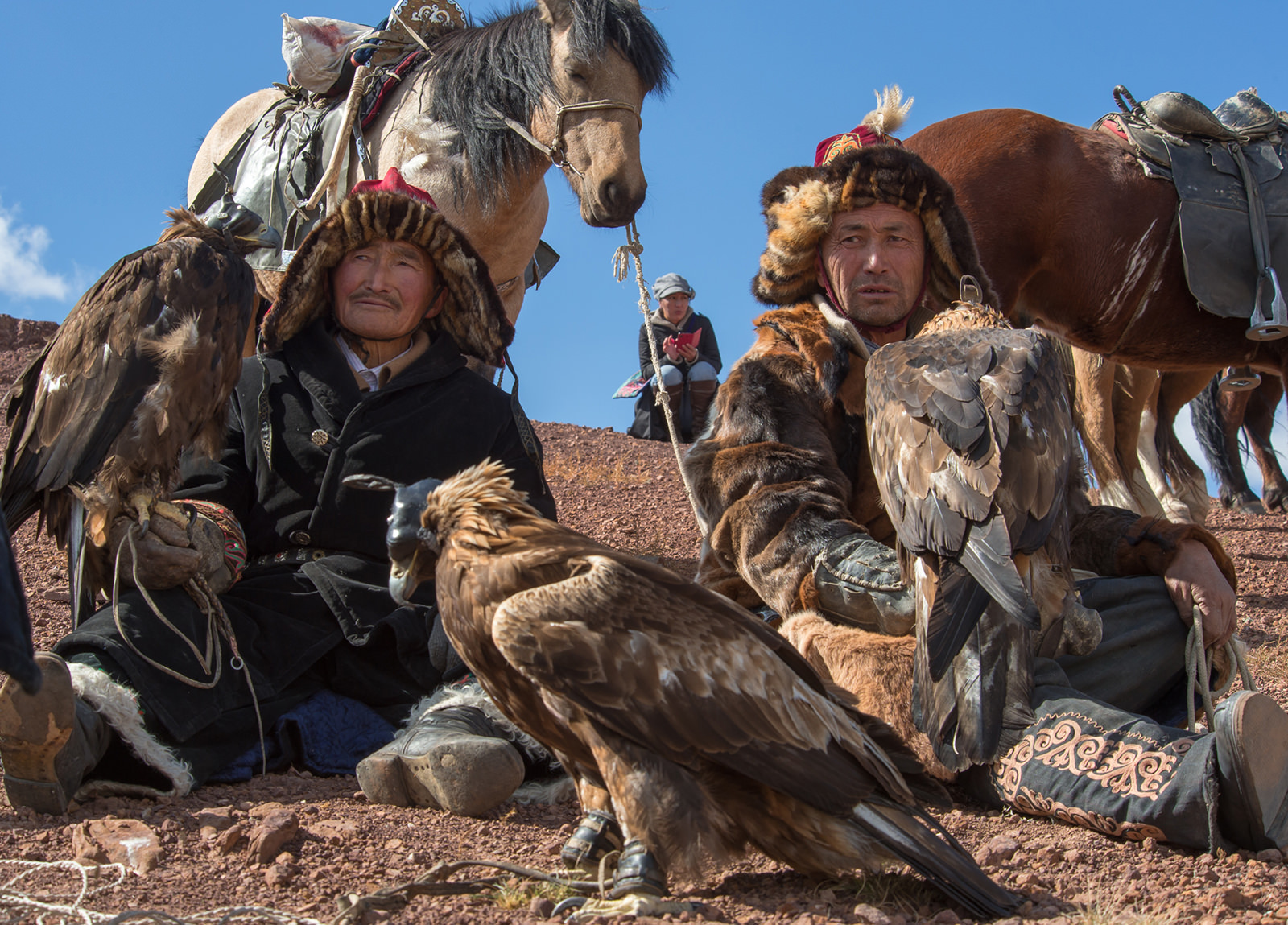 Every year during the first week of October, the “Eagle festival” is celebrated in Bayan Ulgii, in the far west of Mongolia. The aimag of Bayan Ulgii is situated in the breathtaking scenery of the Altai mountain range, where four Asian countries meet. The inhabitants of this area with its rich mix of cultures are mostly ethnic Kazakhs wearing their traditional embroidered clothes.

The “Eagle festival” is a tournament of falconers from the region, who hunt with trained eagles. Once a year, they come together from their home village to measure their skills. There are about 380 falconers organized in an association. They are of all ages, from the teenage boy to the octogenarian, but in keeping with tradition, no girls or women may practice the art.

The training of the future eagle-hunters sets in at a very early age. Boys under ten are initiated to the art and science of falconry by their father or grandfather, usually not starting right out with an eagle, but beginning with a smaller bird of prey. Adult falconers use the golden eagles native to the region. A tamed eagle can live up to 32 years in captivity, but as a rule, the birds are set free again after a few years hunting. A full-grown golden eagle has a wingspan of about two meters, and a weight of between six and twelve pounds. The falconers normally live as nomadic cattle breeders for most of the year and hunt only in winter. Their eagles are trained to catch small game such as hares or foxes, but they are known to kill even small wolves now and again.

In the tournament, the eagle-hunter has to perform three tasks. At first, the mounted falconer must call his bird from the top of a hill to settle on his arm. Then, the eagle has to hunt for hides drawn by a running horse. At last, the bird must catch a live animal typically a fox. The participants are judged not only by their skills in the art of eagle-falconry, but also by the finery of their attire, the glove, harness and bird’s hood made from deer hide, as well as the traditional hunting dress.

After the falconry tournament, the men engage in rider’s games, like plucking a flower from the back of a running horse, or the traditional “buzkoshi”. In this central Asian sport sometimes said to be the origin of polo several riders fight for the possession of a dead goat. Horse races and archery tournaments round off the festival. Although it’s a long way from Ulaanbaatar, the trip is well worth it. There is no other place on earth where you can see so many golden eagles at close range.

The Mongolian national holiday Naadam is celebrated in Mongolia each year on 11 July. “Eriin gurvan naadam” the three manly games of wrestling, horse racing, and archery- make up the core activities of the National day festivals.

Wrestling – At the start of competition all the wrestlers with the highe r title – holder in front , enter the hall in a line wearing gutuls (decorated Mongolian boots. ) and hats and their wrestling costumes called “zodog”(an open fronted , long sleeves vest of silk) and “shuudag”(tight short trunks ). There are many different titles for the wrestlers such as Titan (avarge), Lion (arslan). Zaan and Falcon. All the names signify strength. Titles are mostly confirmed during the national festival Naadam. A wrestler who wins five fights in succession during one competition has the right to have the title of Falcon, and if he wins seven fights in succession Elephant. When a wrestler wins all the fights in a competition during one of these festivals he will be a Lion. If he wins a subsequent year he merits the title of titan, the highest rank. There is a variety of throws used to defeat opponents. Some say there are hundreds of them. When the wrestling arena or step onto the carpet in the case of an indoor competition and the second take off the wrestler's hats.

When a wrestler touches the ground with any part of his body other than his feet and arms, he is considered to be defeat. The main difference between Mongolian national wrestling and international free style wrestling is that the weight category of wrestlers is not taken into consideration.

Horse racing. Mongolian people have loved horse racing since time immemorial. A whole system for conducting the contests has developed over the centuries. In the races held during national festivals, including Naadam, participants are six age groups and the distances range from 15-30kms. No special tracks are prepared, the horses covering the distance in the steppe and jumping over natural barriers. Before they start the riders sing an ancient war-like song – Giingoo. The competitors start at the finishing line and at the signal to start and back to the finish line. Thus the distance is actually doubled. The horse racing can be held on saddled or unsaddled horses. Horses of two years older take part. The winner is honored with a cup of airag which he drinks and sprinkles on the head and croup of his horse. After the races, praise-singer extols the best riders and their horses.

Archery: the third element of the national games is archery. Five lines engraved on an ancient Mongolian target immortalize the phenomenal record of Yesuhei Hero, saying that his arrow hit the target at a distance of 536 meters. The bow is an ancient invention going back to the Mesolithic Period. Ancient Mongolians made their contribution to the design of the bow as a combat weapon.

Today Mongolian's use less complicated form archery than in ancient time; the target is “wall” made of cork cylinders braided together with leader straps. It is four meters long and 50cm high. The target is placed on the ground at a distance of 75 meters for men and 60 meters for women. In the past Mongolians used three types of bows; “big hand” (165-170cm),”average hand” (160cm), “small hand” (150cm). Today Mongolian's mostly use the average hand bow which requires a force of 22 to 38kg to draw it.

Arrows are usually made from pine wood and had feather fins which help the arrow to reach distance of 900 meters. Naadam archery also attracts individual archers as well as Teams of 8-12 people. Every male archer has forty arrows to shot at each target. The judges dressed in national attire, stand by the targets with hands held up after the arrows have been shot. They praise the best shot in a drawing recitative voice. The contests are accompanied by colorful national rites. Before the competition starts you hear the recitative song “uukhai”, calling on the archers to be good marksmen and hit the target. 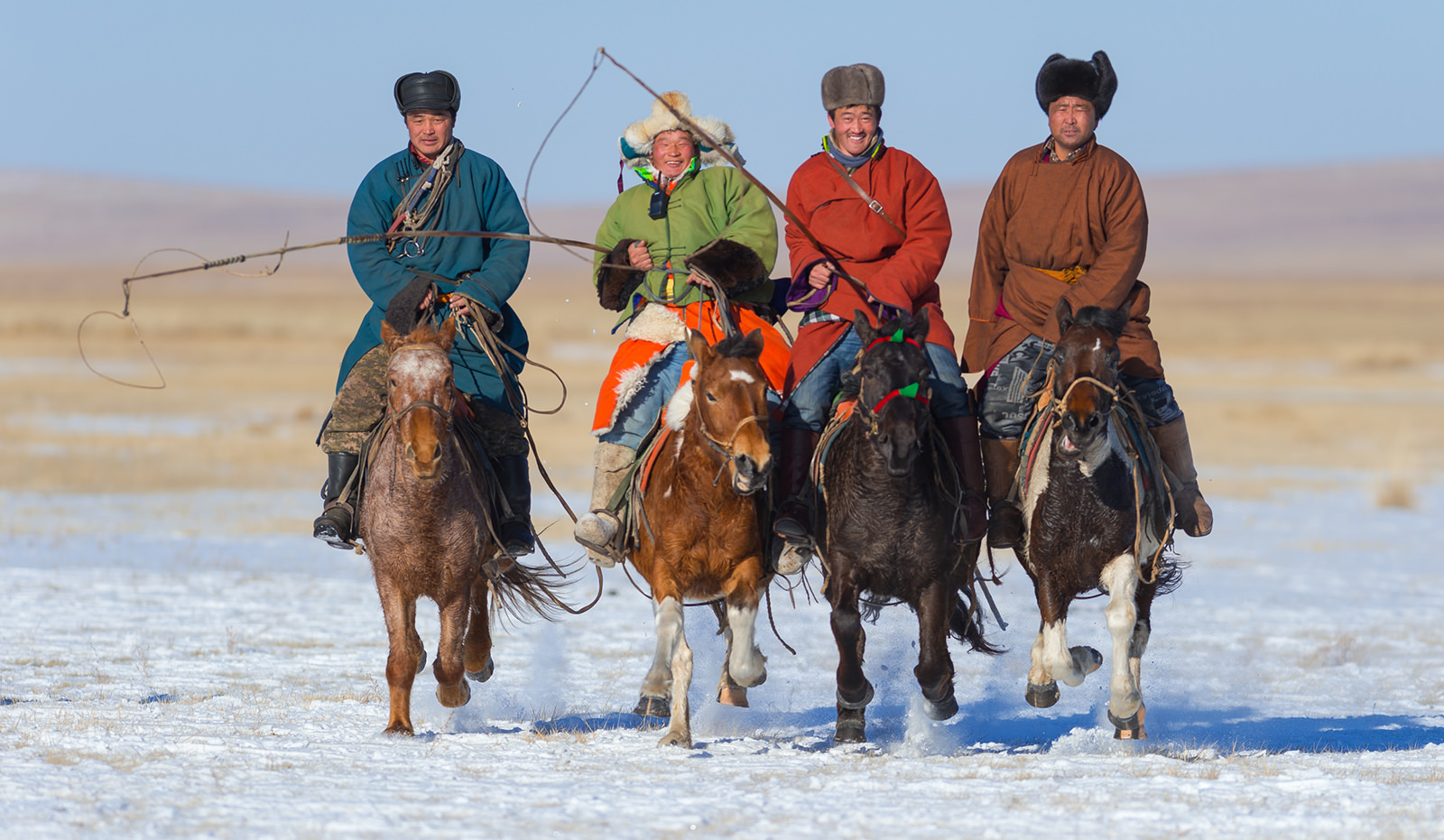 Tsagaansar or White Month is one of Mongolia’s two major and long awaited holidays, the other being Naadam in July. Tsagaansar or White Month, the first month of spring, has been one of the most important celebrations of the Mongols for thousands of years. This is a time of the year when the winter passes away and the spring comes in. Tsagaansar is a festival of white food (food with white color – milk and diary products, fermented mare’s milk etc.) Tsagaansar represents a heartfelt spirit of people. On this day, people clean their body and mind from all bad things and start a new fresh clean life. Tsagaansar is the day when people express respect to elder people and relatives, renew friendship and sympathy to each other and reconfirm family ties. Since the holiday means all relatives, neighbors, friends and guests will be treated to a lavish meal, women make more than a thousand or two buuzand dumplings. Ready dumplings are lined on wooden plates and put outside. The next day, frozen buuz are ready to be steamed. Families all across the country stock-up on food, diary products, mild milk vodka and other specialties for the occasion. The Tsagaansar eve or the last day of winter is called “Bituun”, which means “full darkness” it is a single night when no moon is invisible in the sky. Beforehand, all the business of the past year must be wrapped up; debts paid and good relations restored. All the Bituun ceremony is supposed to start when it gets dark outside. The Bituunis mainly celebrated in close family. In the evening, all the family members gather, the women start to set the table.

With the sunrise, the greeting ceremony starts inside the family. The oldest person stays in “Hoimor” (ger’s northern side, the most respected place) and younger family members greet him or her first and then greet each other. The younger greets the older by extending arms with the palms up and holding the elder’s elbow from underneath. This greeting is called zolgoh. Everybody greets each other except husband and wife, because they are believed to have become one person. Usually, people hold “Khadag” (holy scarf of blue silk with a spiritual meaning) in their arms. All of the first month of the New Year is considered a holiday and the visits and congratulations continue. It is necessary during that month to visit parents no matter where they live.

When the greeting ceremony is over, everyone sits behind the table and men starts exchanging “Khoorog” (a snuff bottle made usually semi-precious stone and filled with finely pulverized tobacco). The typical greeting words are “Daagadalantai, byaruubulchintai, sureg mal targanorovuu?” which can be translated as “Does your 2 year-old horse have enough fat on the wither (means good health) does your 2-year old yak have enough muscles (means good power), “did all your animals pass winter safety?” and “Sarshinedeesaihanorovuu? Nassuuderhedhurev?”, which is used to ask an old person about her/his good health and age as people are proud of old age. Exchanging Khoorog means expressing friendly intentions to each other and is usually the starting point of introducing a stranger. Exchanging Khoorog creates a warm atmosphere between people and makes the start of a friendly talk that helps to learn the true heart of the stranger.