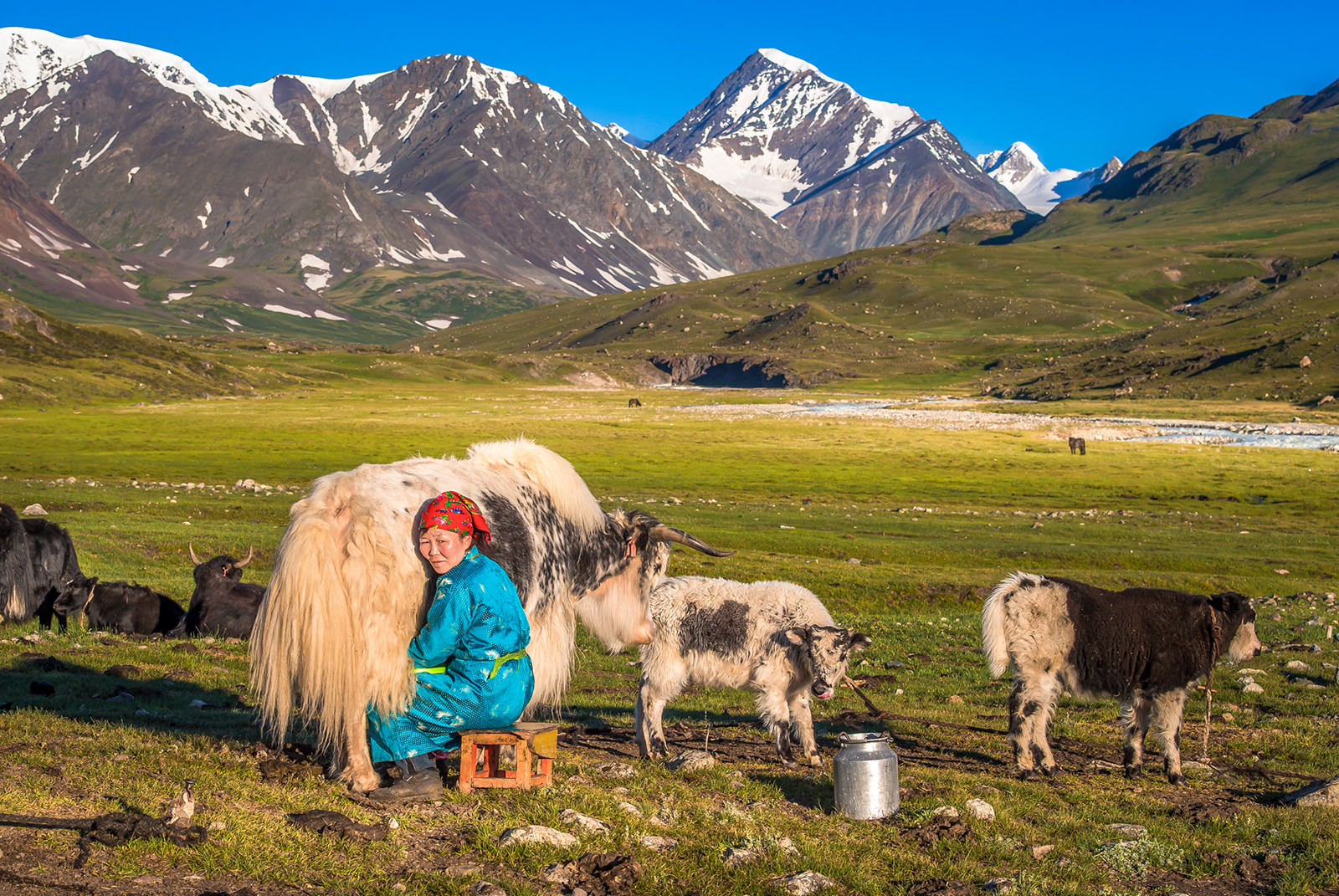 Flaming cliffs known as Flaming Cliffs is located 20 kilometers far from Bulgan soum, where 70 million years ago a lot of Paleontological findings have been discovered. The place is known as Flaming Cliffs so named by Roy Chapman Andrews American explorer who had visited Mongolia in 1922. During two years he searched through the Mongolian Gobi Desert and he found dinosaur fossils and dinosaur eggs about 10-15 cm from the Bayanzag for the first time ever the world. The name Bayanzag derives from a picturesque forest in the area. Archeologists also claim the area has myriad of unearthed object from the Stone Age. 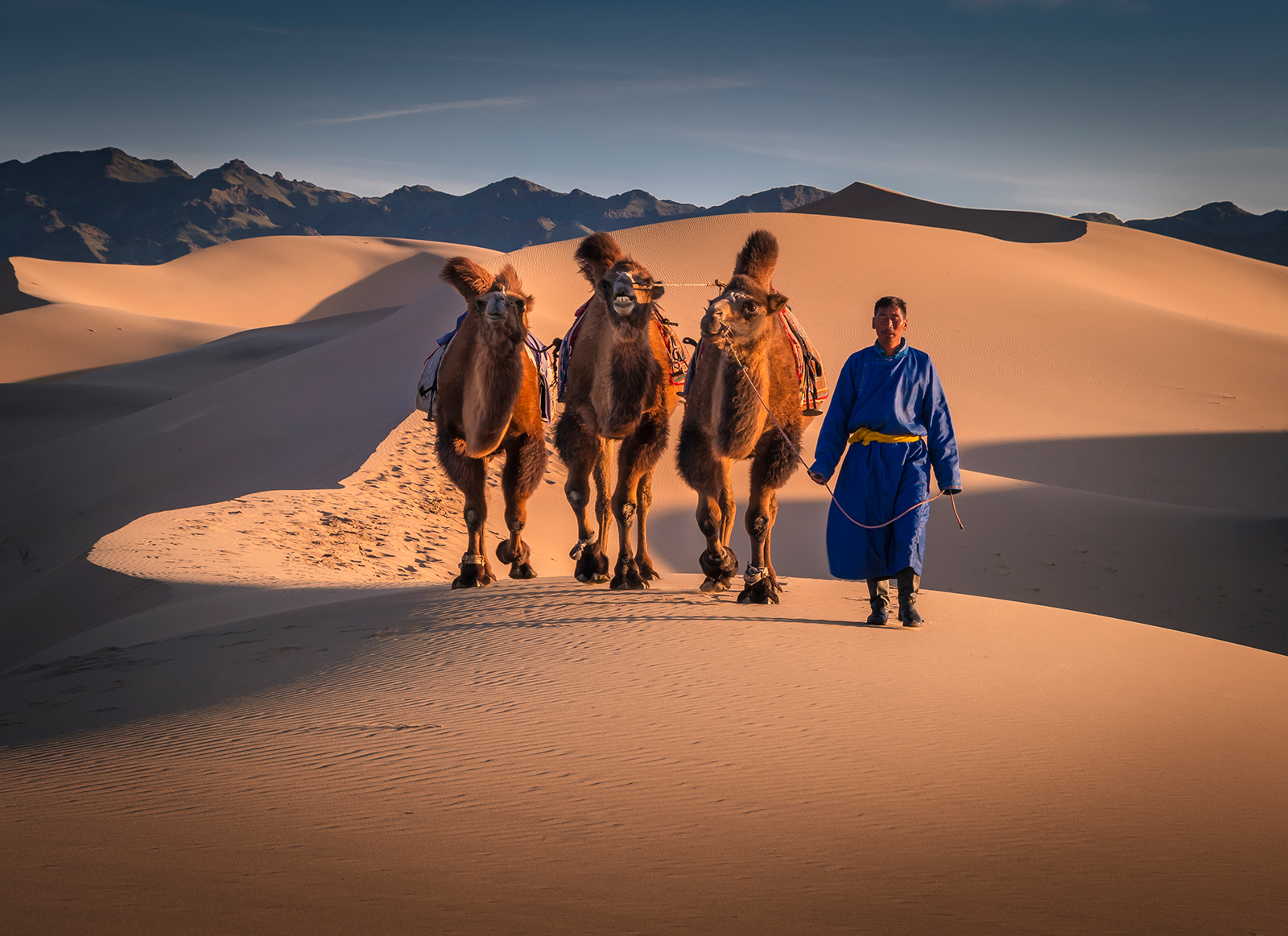 These sand dunes are located to north of the Baruunsaikhan Mountainss and in the northern part of the Sevrei and Zuulun Mountains, about 200 kilometers west of Dalanzadgad in Sevrei soum. They extended for 180 kilometers. From distance it looks like a fin of huge gold fish. You have chance for camel riding tour is available at the area nearby the sand dunes. The shifting sand blown by the wind or someone makes sound so it is called Singing Sand Dunes. There is beautiful green oasis known as Seruun bulag near the Khongor River.

The valley in the Zuun Saikhan Mountain located 45 kkm from Dalanzadgad, in the center of South Gobi aimag, is called Yolyn Am. Very wide at the entrance, it narrows gradually into a remarkable gorge. The narrow Valley between high rock walls has breathtaking dramatic scenery, and no doubt is one of the most beautiful place in the country. You have a big chance to see wild animals such as ibex and wild sheep of course see the vultures. 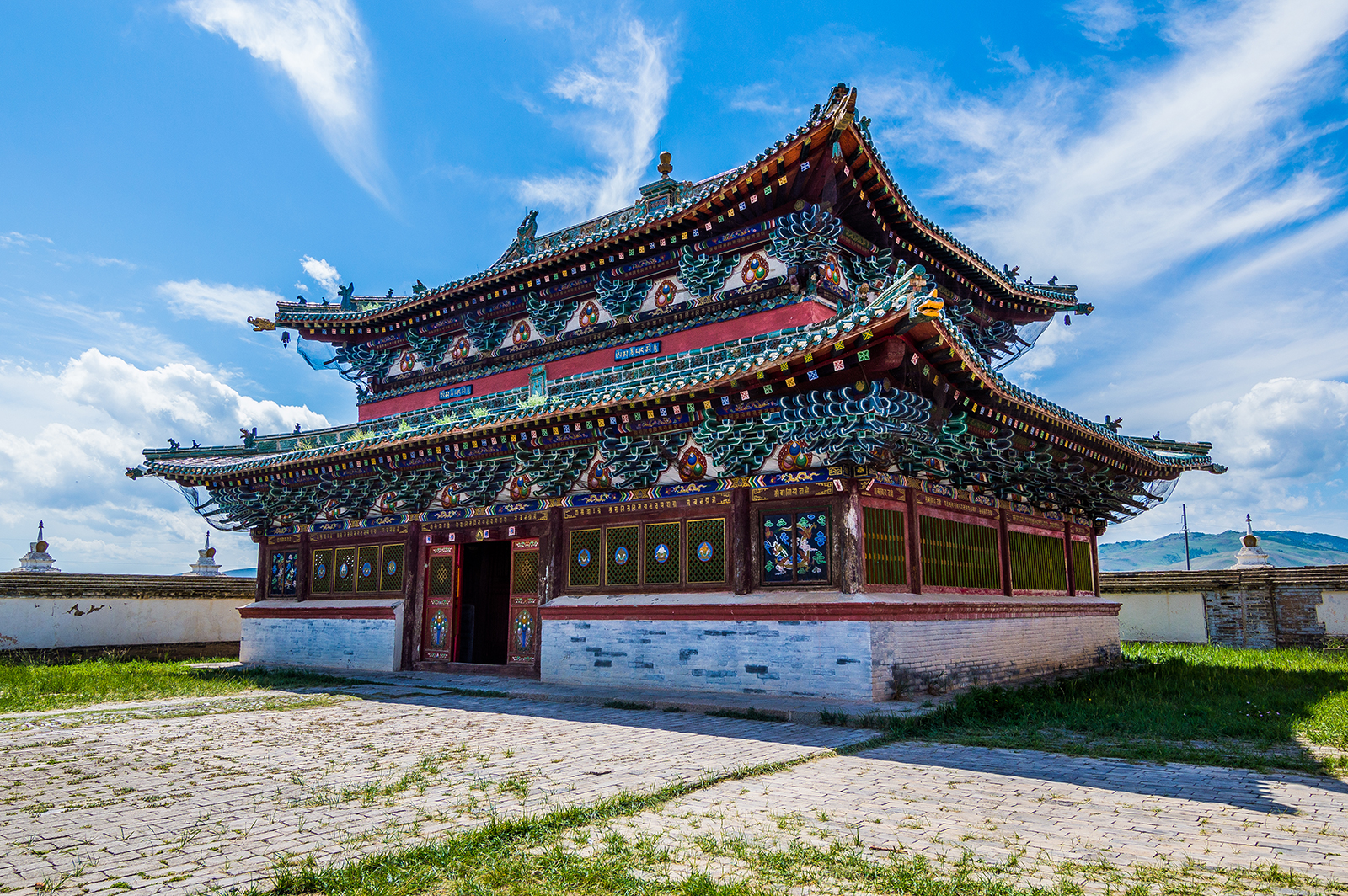 Ancient capital of Mongolia Karakorum city was located on the right bank of Orkhon River and on the north-eastern slopes of the Khangai Mountain and founded by Chinggis khan in 1220, was not only the capital of the vast Mongolian Empire but the epicentre of trade along the Silk Road. At that time the inhabitants of city were mostly Merchants craftsmen who came to karakorum from all over the world. Khubilai khan moved to the capital of the Mongolian Empire to China, establishing the Yuan Dynasty, began losing its importance. In 1379 much of the city was badly damaged during an attack by the army of the Min Dynasty. Turtles carved from the stone marked the boundaries of the complex. Nearby, Turkish monuments and rock inscription were erected in 8-9th centuries in memory of outstanding fighter for independence. World famous for its wonderful ancient remains, Karakorum is located 370 km away from Ulaanbaatar with an elevation of 1600 meters above sea level.

This is another granite rock formation in the middle of the dusty plains. In the 19th century, two revered monks lived here in gers – remnant of their rock drawing can be found in the area. The rocks are worshipped by locals who sometimes make pilgrimages here. Naturally, there is legend that Chinggis Khaan stayed at the rocks. Five Kilometers away, the highest peak in the area, Baga Gazriin Uui (1768m), will take about five hours to climb. The mountain also contains a cave with an underground lake. The mineral water spring and trees in the region make it a great spot to camp, and there are plenty of rocky hills, topped by ovoo (sacred pyramid – shaped collections of stone and wood), to explore. 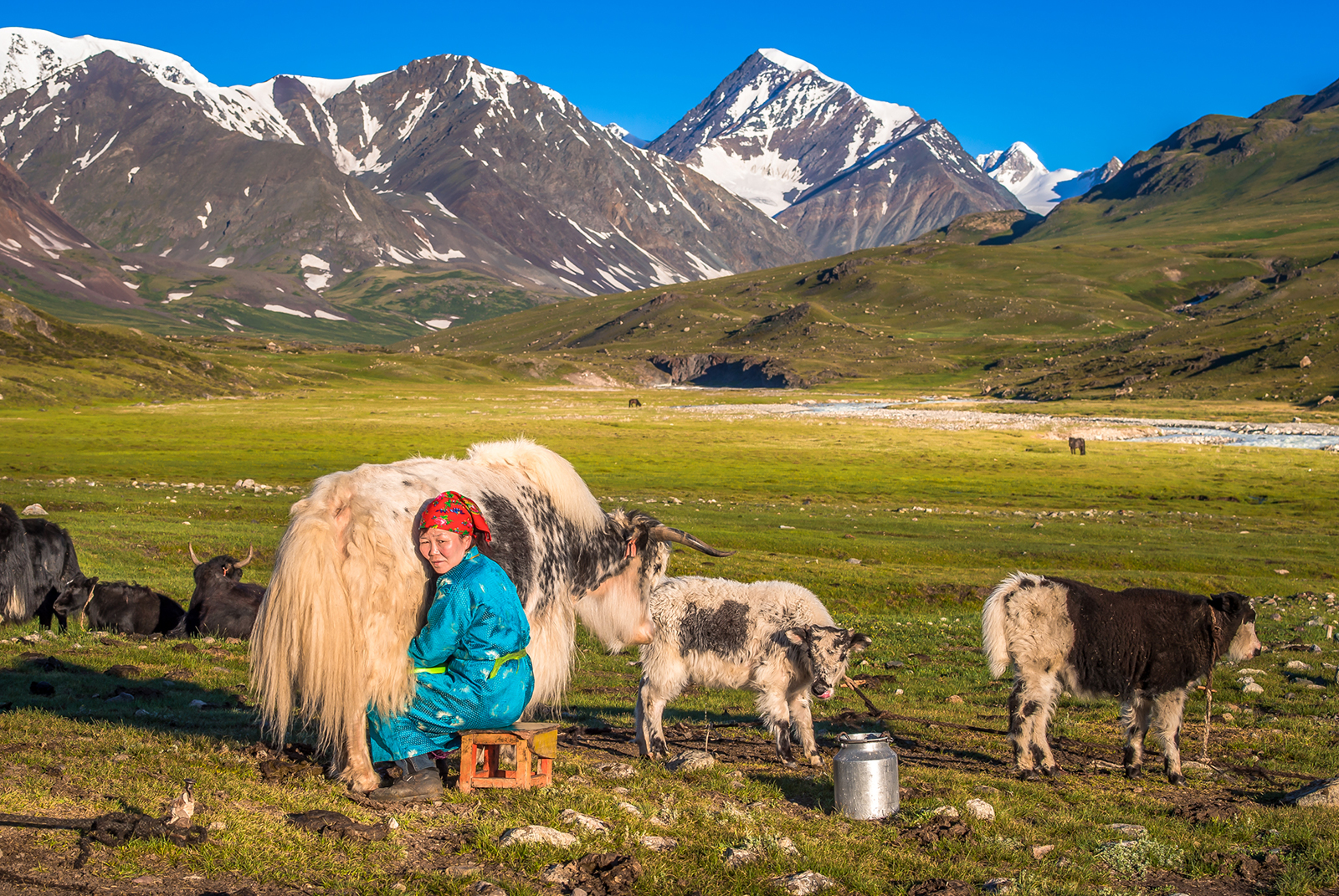 This stunningly beautiful park stretches south from Tavanbogd Uul and includes the three stunninglakes of Khoton Nuur, Khurgan Nuur and Dayan Nuur. It’s remote area, divided from China by the high wall of snowcapped peaks, and known to local Kazakhs as the Syrgali region. All three lakes are the source of the Khovd Gol, which eventually flows into Khar Us Nuur in Khovd aimag. It’s possible to make rafting trips down river from Dayan Nuur, though no agencies offer this at present. There are many archeological sites in the region. As the main road through the region swings towards the southern shore of Khurgan Nuur you can see a stupa-like construction and several burial sites. Nearby are balbal (Turkic stone statue) and the remains of a processional pathway. Further along the road is a wooden Khazakh mosque, with a ger-shaped roof. Further north-west, along the south-western shore of Khoton Nuur, the road deteriorates and there are several rivers ro cross as they flow into the lake. North-west of Khoton Nuur the mountain close in the there’s some fine trekking possibilities.

Tavanbogd (Five Saint) mountain rises 4374m above the borders of three nations, and for this reasons it is also known as Nairamdal (Friendship) Peak. If you it on the summit, you can simultaneously be in Mongolia, China and Russia. Tavanbogd is one of Mongolia’s most spectacular peaks, of interest to professional climbers, and the only one in Bayan Ulgii to be permanently covered with large glaciers (including the 19 km long Potanii Glacier, the longest in Mongolia). It’s fairly dangerous, and to climb it you need to be with an experienced group properly equipped with ice axes, crampons and ropes. Don’t even consider attempting it solo. The best time to climb us July, August and September, after the worst of the summer rains. The massif is made up to five peaks (the five saints)- khuiten, Naran, Olgii, Buraed and Nairamdal – the highest of which is Khuiten (meaning ‘cold’) at 4374m.

Khorgo volcano – a dead volcano (2240m high) covered with basalt is easy to climb. Inetersting bubbles of solidified lava named “Basalt ger” containing sometimes ancient rock paintings. From the crater you have a good view to Terkhiin Tsagaan Nuur which is rich of fish and different birds are breeding here. As the lake is 2060 above sea level, it is frozen until June.

On the road between Ulaanbaatar and Tsetserleg, near the border with Bulgan aimag, the lake Ugii Nuur is a wonderful place for birdlife – cranes and ducks, to name just few species, migrate to the area around late April. The lake is also renowned for its fishing (and the bugs by the lake shore!). The lake and Khar balgas ruins can only be reached from the direct road linking Tsetserleg with Ulaanbaatar.

Erdene zuu monastery was built by Avtai Sain Khan on the ruin of the Mongolian capital Karakorum in 1586. It was the first great Buddhist Monastery of Mongolia. It is part of the World Heritage Site entitled Orkhon Valley Cultural Landscape. Stones from the ruins of Karakorum were used in construction. It is surrounded by a wall featuring 108 stupas, 108 being a sacred number in Buddhism, and the number of beads in a Buddhist rosary. The monastery was damaged by warfare in the 1680s, but was rebuilt in the 18th century and by 1872 had a full 62 temples inside. The Erdene Zuu Monastery was taken to state protection and became museum in 1944.

Apart from the springs at Khujirt, the main attraction in the area is the Orkhon waterfall (GPS: N46 47.234’, E 101 57.694’). The waterfall is situated in the historically significant Orkhon Valley, whose river flows an incredible 1120km to the North before it joins the mighty Selenge Gol. Also called Ulaan Tsutgalan, the waterfall was formed by a unique combination of volcanic eruption and earthquake about 20.000 years ago the fall is naturally most impressive after heavily rain.

The nondescript town of ikh Tamir is 22km along the main road west of Tsetserleg. The reason to stop here is to inspect the enormous Taikhar Chuluu rock formation. The rock is the subject of many local legends; the most common one is that a great baatar, or hero, crushed a huge serpent here by hurling the rock on top of it. Locals claim there are some ancient Tibetan inscriptions on the rock, though you will be lucky to spot them through 30 years of Mongolian graffiti. There is even an ovoo at the top.

Stretching from the border with Bayan-khongor almost to Dalanzadgad, the 2.7 million hectare Gurvansaikhan Natural Park is the highlight of the aimag, and the overwhelming reason why any toutist comes here, unlike other national parks in the Gobi, the Gurvansaikhan, does contain a few attractions, and its facilities – ger camps and roads are reasonably good. Gurvansaikhan, which means the ‘three beauties’ and refers to its three riders, contains mountains, dinosaur fossils, sand dunes, rock formations and a valley which, incredibly, has ice for most of the year. The park also contains over 200 species of birds, including the Mongolian desert finch, cinereous vulture, desert warbler and houbara bustard. Spring brings further waves of migratory birds. The park also has maybe 600 or more types of plants (a lot of which only bloom after very infrequent heavy rain). The sparse vegetation does manage to support numerous types of animals.